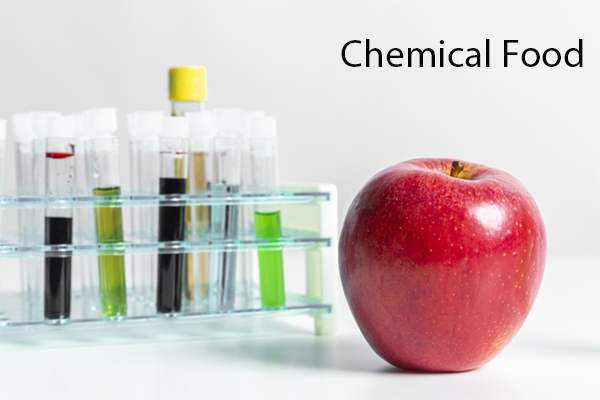 Food may be defined as the substance that provides nutritional support and essential nutrients such as vitamins, carbohydrates, minerals, fats, and proteins for an organism. This substance is digested by an organism that provides energy to cells and stimulates growth. Food items that are produced without chemicals (fertilizers, pesticides) are known as organic foods whereas Non-organic food items are those types of food items in which less than 70% of ingredients are organic.

In this article, we will discuss Non-Organic food items, their adverse effects, and how Ayurveda advises to correct them.

With the increase in population drastically in the past 6-7 decades, the demand for food has also increased. So to enhance the productivity, the use of various pesticides, insecticides, and other man-made chemicals on the crops are promoted for doubling their productivity and yield. The Green Revolution and the white revolution in India are the best examples of it.

In India (In 1970’s), the Green revolution is the period when conventional agriculture practices are converted to an industrial system for higher yield by the adoption of modern technology and methods such as bio-fortified high-yielding seeds, use of insecticides, fertilizers, and pesticides. Various food items are produced by these chemicals are known as Non-Organic food. Non-Organic foods are those in which synthetic chemicals are used on the crop to enhance growth. Ready to cook items, frozen items, baked items, commercial items are also included in Non-Organic. Many chemicals present in Non-Organic food items may result in several diseases such as high Blood Pressure, Obesity, Heart diseases, cancer, diabetes.

Difference between non-organic and organic food

Farmers definitely want high production of their crops. But in many cases, it may not be possible to grab high production due to the spreading of insects to their fields. Insects are responsible to retard the growth of the crop. For the protection of fields, farmers use many chemicals and insecticides or pesticides. Small quantities of pesticides may contain foods that store toxic substances in the body that result in harmful diseases.

Different types of food additives are used to store food items for a long time. Several Chemicals are added during the production of Non-Organic food items to enhance the freshness, appearance, texture, taste, etc. Food additives include preservatives, colors, Artificial sweeteners, etc. some examples are Monosodium Glutamate, Sodium Nitrite, etc. These chemicals may cause horrible effects on our bodies.

Processed food is getting common in developed countries day by day. Because these food items are less time-consuming. Processed food items are produced by performing several chemical operations to change or preserve them. Higher amounts of salt, sugar, oil, etc. are used to prepare the processed foods. These unhealthy substances are responsible for heart disease, hypertension, diabetes, etc.

Overconsumption of Non-Organic food causes several kinds of diseases. Some of these are

The brain is the most important organ in the body. The main function of the brain is to collect sensory information and direct motor responses. If the brain doesn’t work properly then it results in improper functioning of the body.

Various chemicals present in Non-Organic food have their own effect. For example, Organophosphate is a harmful chemical that changes the neurotransmitter receptor in the brain, Due to this chemical, the brain can’t work well, Chlorpyrifos results in the hardening of DNA which retards the cells to perform their functions. Chemicals that are present in Non-Organic food may slow down mental strength.

A higher frequency of Non-Organic food consumption was directly related to an increased risk of cancer. The chemicals present in Non-Organic foods disrupt the normal function of cells. These food items cause a higher possibility of facing cancer.

Consumption of Non-Organic food during pregnancy may face horrible problems like a fetal failure. Many chemicals that are used in pesticides cause problems for fetal growth.

Food produced with the help of chemicals (i.e. insecticides) is neurotoxic and also interferes with the activity of nerves. This will slow down the central nervous system.

As we know about the hazards and possible disease that are being caused by the consumption of non-organic food items. Now, let’s have an Ayurvedic review on it.

Acharya had mentioned the concept of “Virudh ahara” which can be related to Non-Organic food. The drink, food, and medicines, which does displacement of dosha from its site, but does not drum out are known as “viruddha”. Acharya has mentioned many types of Virudhahara in Charaksutra.

This shloka means that many of the diseases are caused due to improper food. To prevent various incurable diseases, an intelligent man should consume good food in the right quantity.

Avoid consuming most of the non-organic food items linked above and replace them by using the seasonal fruits, seasonal vegetables or the crops which are cultivated using natural manure free from artificially prepared fertilizers and pesticides.

Acharya Charka mentioned some of the dravyas which can be consumed on a daily basis. Without any complications these includes

This shloka means that Food like salt, gooseberry, barley, rainwater, milk, ghee, meat, green gram, rice, and honey should be consumed regularly to maintain a healthy body and prevent many diseases. This shloka also gives a description of the Balance diet in Ayurveda.

At the end of this article, we can see that the consumption of Non-Organic food can lead to several types of diseases because of chemicals. Acharya’s said in Ayurveda that the replacement of this Non-Organic food is available. Adding some ingredients in a regular meal gives prevention from various kinds of diseases. Thus, one must be aware of what to eat and what to not.